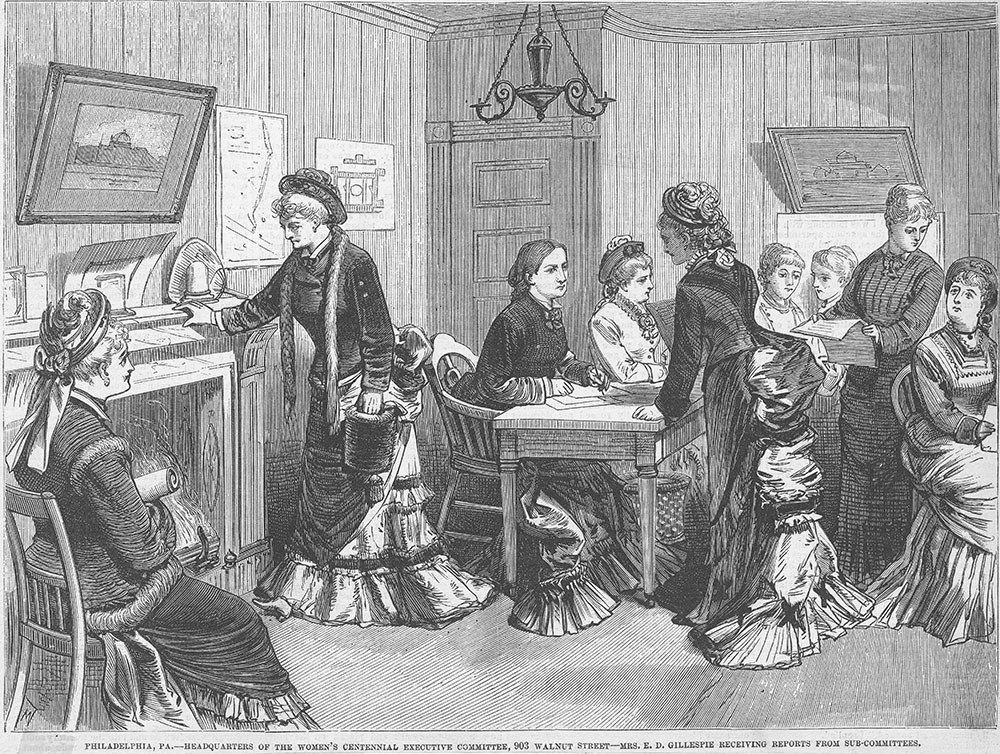 Episode No. 7 – Women and the Centennial (Companion Blog)

Women and the Centennial

This story about Caroline Le Count and the Women’s Centennial Executive Committee has so many layers, and it feels remarkably relevant today. You could take this story in many different directions. Chris Hayashida-Knight, PhD, now at the University of California, Chico, delved into this story in his dissertation about Black Women’s Nationalism and Activism in the Reconstruction Era. But you could also approach this story by looking at women’s roles in society and how Black and white women struggled to find their own power within a white man’s world.

This podcast episode focuses more on the different attitudes and interactions between the elite white and Black women as they navigated the challenges of fundraising for the Centennial. I felt there were many lessons we could learn to help us with our current discussions about diversity and inclusion of previously excluded groups today.

I also wanted to underscore how varied and complex this group of women were. Hayashida-Knight had warned me about treating Caroline Le Count as a golden-hearted hero, instead of as a truly remarkable and complicated person. I took inspiration from the wonderful series of historical nineteenth century images included in the gallery below. They are women. They are Black. But they are each a galaxy with their own unique constellations of experience, talents, and dreams. I hope I have given Le Count some of this depth of character. I doubt that I have the nuances of this story completely right, but I look forward to how future historians interpret this event.

I was really intrigued by Caroline Le Count as a well-known dramatic reader. I wanted to work this into Le Count’s story somehow. It is hard for us to understand this aspect of her career without really getting into nineteenth century entertainment. Why would a Black woman garner large crowds to listen to her read poems written by white men, often about patriotic events? It feels weird.

However, Le Count’s dramatic reading talents were part of a well-respected tradition of refined entertainment. Eloquent speaking was a desirable attainment for all well-educated citizens. Being able to speak well was considered essential to participating in a progressive, democratic society. It was also the sign of intellectual skill as well. One manual stated that “No one is qualified to hold a respectable rank in a well-bred society, who is unable to read in an interesting manner, the works of others” (Porter, Analysis of the Principles of Rhetorical Delivery as Applied to Reading and Speaking, 1827). Most importantly, it was a highly respectable way for nineteenth century women to perform on stage. It gave women an acceptable sphere to showcase their talents, since they were denied roles as lawyers, politicians, and church leaders.

Le Count would have learned rhetoric and elocution at the Institute for Colored Youth, where her talents were first recognized. She was noted for her eloquence, perfect diction, and expressive gestures. All marks of the best elocutionists. Le Count’s talents emphasized that she was highly educated, extremely well-bred, high minded, finely cultured, and in the best taste. I think this is exactly how Le Count wanted to be thought of. Dramatic reading also fed Le Count’s ambitions when other public roles were closed to her.

And what about the poems she chose to read? They appear to have been crowd pleasers in a post-Civil War America. Many of them would have resonated with U.S. Colored Troop veterans and women who had done their part to win the war. Not only was “Sheridan’s Ride” one of the most popular Civil War poems in its day, it also commemorated a battle that included U.S. Colored Troops in Winchester, Virginia, in 1864. “Barbara Frietchie” is about a brave, patriotic, 95-year-old woman who shamed the Confederate troops for shooting on the American flag, which she waved defiantly from her upstairs window. She reminded Stonewall Jackson that he is a traitor to the country that he took an oath to serve. These poems must have fed into nostalgia and patriotic feelings for a generation. I’ve even found them on early twentieth century records.

You’ll find these two poems from Le Count’s standard repertoire below. And big thanks to listener Ed Jonas for sharing the Caroline Le Count playbill shown below.

Celebrating the Declaration of Independence in Philadelphia

This story also takes particular relevance as Philadelphia is trying to organize an inclusive celebration for the 250th anniversary of the Declaration of Independence in 2026. You can learn more and find ways to get involved at https://www.philadelphia250.us/.

If you want to dig into the history of Philadelphia’s 1876 Centennial, there is a lot of great information out there.

Let Me Know What You Think

As I plan for a second year of Found in Philadelphia, I would greatly appreciate hearing your comments and thoughts for the future of the podcast.

You can leave a comment here in the blog, or on your podcast app.

You can also help by taking this short survey about the podcast at https://www.surveymonkey.com/r/Y23Q8S5

Many thanks for your help!

Up from the meadows rich with corn,
Clear in the cool September morn,

The clustered spires of Frederick stand
Green-walled by the hills of Maryland.

Round about them orchards sweep,
Apple- and peach-tree fruited deep,

Fair as a garden of the Lord
To the eyes of the famished rebel horde,

On that pleasant morn of the early fall
When Lee marched over the mountain wall,—

Over the mountains winding down,
Horse and foot, into Frederick town.

Flapped in the morning wind: the sun
Of noon looked down, and saw not one.

Up rose old Barbara Frietchie then,
Bowed with her fourscore years and ten;

Bravest of all in Frederick town,
She took up the flag the men hauled down;

In her attic window the staff she set,
To show that one heart was loyal yet.

Up the street came the rebel tread,
Stonewall Jackson riding ahead.

Under his slouched hat left and right
He glanced: the old flag met his sight.

It shivered the window, pane and sash;
It rent the banner with seam and gash.

Quick, as it fell, from the broken staff
Dame Barbara snatched the silken scarf;

She leaned far out on the window-sill,
And shook it forth with a royal will.

“Shoot, if you must, this old gray head,
But spare your country’s flag,” she said.

A shade of sadness, a blush of shame,
Over the face of the leader came;

The nobler nature within him stirred
To life at that woman’s deed and word:

“Who touches a hair of yon gray head
Dies like a dog! March on!” he said.

All day long through Frederick street
Sounded the tread of marching feet:

All day long that free flag tost
Over the heads of the rebel host.

Ever its torn folds rose and fell
On the loyal winds that loved it well;

And through the hill-gaps sunset light
Shone over it with a warm good-night.

Barbara Frietchie’s work is o’er,
And the Rebel rides on his raids no more.

Honor to her! and let a tear
Fall, for her sake, on Stonewall’s bier.

Over Barbara Frietchie’s grave
Flag of Freedom and Union, wave!

Peace and order and beauty draw
Round thy symbol of light and law;

And ever the stars above look down
On thy stars below in Frederick town!

Up from the South, at break of day,
Bringing to Winchester fresh dismay,
The affrighted air with a shudder bore,
Like a herald in haste to the chieftain’s door,
The terrible grumble, and rumble, and roar,
Telling the battle was on once more,
And Sheridan twenty miles away.

And wider still those billows of war
Thundered along the horizon’s bar;
And louder yet into Winchester rolled
The roar of that red sea uncontrolled,
Making the blood of the listener cold,
As he thought of the stake in that fiery fray,
With Sheridan twenty miles away.

But there is a road from Winchester town,
A good, broad highway leading down:
And there, through the flush of the morning light,
A steed as black as the steeds of night
Was seen to pass, as with eagle flight;
As if he knew the terrible need,
He stretched away with his utmost speed.
Hills rose and fell, but his heart was gay,
With Sheridan fifteen miles away.

Still sprang from those swift hoofs, thundering south,
The dust like smoke from the cannon’s mouth,
Or the trail of a comet, sweeping faster and faster,
Foreboding to traitors the doom of disaster.
The heart of the steed and the heart of the master
Were beating like prisoners assaulting their walls,
Impatient to be where the battle-field calls;
Every nerve of the charger was strained to full play,
With Sheridan only ten miles away.

Under his spurning feet, the road
Like an arrowy Alpine river flowed,
And the landscape sped away behind
Like an ocean flying before the wind;
And the steed, like a barque fed with furnace ire,
Swept on, with his wild eye full of fire;
But, lo! he is nearing his heart’s desire;
He is snuffing the smoke of the roaring fray,
With Sheridan only five miles away.

The first that the general saw were the groups
Of stragglers, and then the retreating troops;
What was to be done? what to do?–a glance told him both.
Then striking his spurs with a terrible oath,
He dashed down the line, ‘mid a storm of huzzas,
And the wave of retreat checked its course there, because
The sight of the master compelled it to pause.
With foam and with dust the black charger was gray;
By the flash of his eye, and his red nostril’s play,
He seemed to the whole great army to say:
“I have brought you Sheridan all the way
From Winchester down to save the day.”

Hurrah! hurrah for Sheridan!
Hurrah! hurrah for horse and man!
And when their statues are placed on high
Under the dome of the Union sky,
The American soldier’s Temple of Fame,
There, with the glorious general’s name,
Be it said, in letters both bold and bright:
“Here is the steed that saved the day
By carrying Sheridan into the fight,
From Winchester–twenty miles away!”

McNeill, Leila. “The Woman Who Challenged the Idea that Black Communities were Destined for Disease.” Smithsonian Magazine. June 5, 2018. Available online at https://www.smithsonianmag.com/science-nature/woman-challenged-idea-black-communities-destined-disease-180969218/