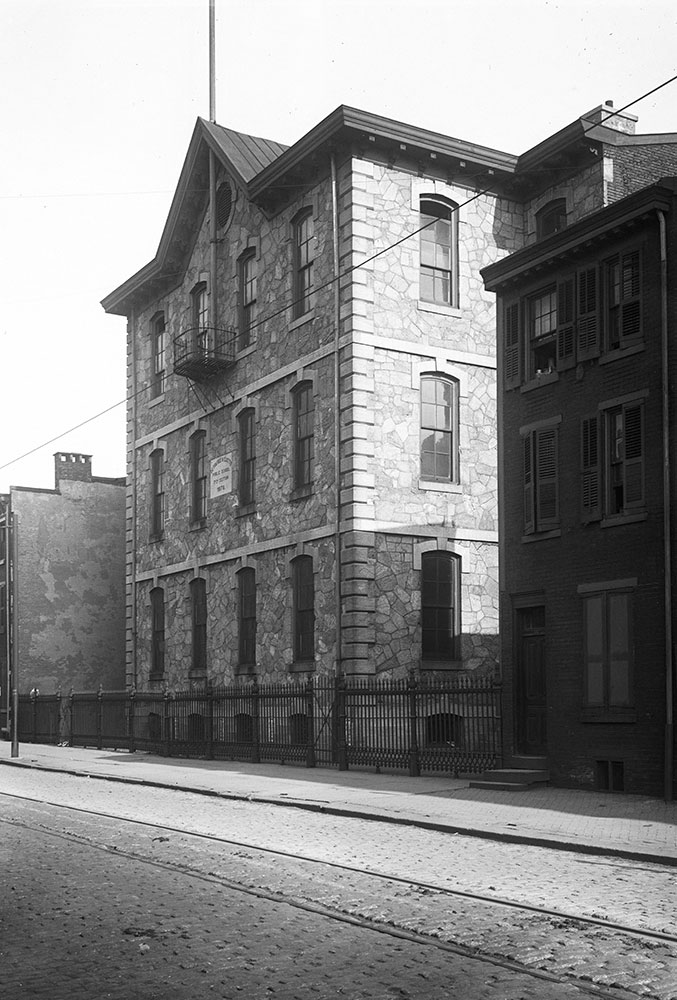 The Octavius V. Catto School was built for Caroline R. Le Count, principal, and her all Black teaching staff, on the south side of Lombard Street, between 20th and 21st Streets. It formally opened in April 1879 and closed with Le Count’s retirement in February 1911.

The school was a three-story brick building clad with green, serpentine stone, which was surrounded by a small yard. Typical of nineteenth century working-class Philadelphia, the O.V. School was sited within city blocks that were a mix of residential rowhouses and trinities, churches, and large-scale factories.

At the time, Lombard Street was paved with granite Belgian blocks, which were designed to offer a better grip for horses’ hooves, and was right on the Lombard-South trolley line. If students or faculty could afford it, they could get to school by horse drawn trolley car, thanks to the streetcar integration battles of Caroline Le Count and the Equal Rights League back in 1867.

The rear schoolyard of the O.V. Catto school backed up against one of the city’s many large woolen mills. The Kennebec Mills complex at 21st and Naudain Streets spanned across the alley with a four-story brick factory building and two-story brick boiler house on the north side of the street, right behind the Catto School, and a four-story brick complex on the south. The mill building that sat right behind the Catto School would have been full of mechanized equipment used for carding, combing, scouring, and drying raw wool on the first floor, drawing and spooling thread on the second, spinning, twisting, and reeling thread on the third, and sorting and storing the finished yarn on the fourth floor. The mill would have been a loud and dusty neighbor for the school, even though it was noted as being kept nice and clean and in good order.

Inside the Catto School

We can get a glimpse inside the Catto School with two newspaper articles, which I am quoting in full below.

The formal opening of the O.V. Catto school quoted in full from “Octavius V. Catto School” in The Philadelphia Inquirer, April 18, 1879.

“The formal opening of the Octavius V. Catto School, for colored children, on Lombard street, above Twentieth, took place yesterday afternoon at three o’clock. The school was named after Catto, the colored teacher who was assaulted and killed during the election riots a few years ago as he was quietly returning from his school  labors. The school house occupies the best site that could be found in the section in which it stands, and was purchased for $7000, while the building, as completed, was erected at a cost of a little over $13,000.

From the fact that this school is the first one taught entirely by colored teachers, opened under the auspices of the Board of Education, it has attracted a great deal of attention. The corps of teachers comprises Caroline R. Le Count, principal; Emma M. Miles, first assistant; Lucretia Miller, second assistant, and Elizabeth J. Ramsey, third assistant.

The exercises yesterday were in themselves interesting, and were rendered more pleasing by being interspersed with vocal and instrumental music. Bishop Payne, of the A.M.E. Church, led in prayer, after which addresses were made by M. Lewis E. Elkin and other gentlemen identified with the school interests of Philadelphia.”

A visit to the O.V. Catto school quoted in full from “Quaker City Items” in The New York Globe (an African-American newspaper), December 29, 1883.

“Last Thursday it was our pleasure to visit the Octavius V. Catto school on Lombard St above 20th. This school is about 21 years old and the pleasant structure of green stone erected in 1878, presents a pleasing scene from every point of view. It was named in honor of Octavius V. Catto, who taught English Literature and Mathematics at the Institute for Colored Youth, and who it will be remembered was so basely assassinated by a Democratic hireling in 1871. On entering the school the first thought that forces itself on the mind is how bright and cheerful are the class rooms. Indeed the school trustees pronounce it the most cheerful school building in the city. Miss Caroline R. Le Count is the principal, ably assisted by the subjoined staff: Emma M. Miles, Lucretia C. Miller, Elizabeth J. Ramsey, Annie E. Marriett, John H. Clifton, Burton R. Young. Charles Ferrette, Sr., is janitor. The course of instruction ranges from the lowest primary to the highest secondary and fits scholars for the high grammar schools. Twenty three graduated last June. There are 340 on the roll now, the attendance arranging ninety per cent., boys 160, girls 180. The scholars who naturally get a little tired from sitting are rested at 10:30 A.M. by marching or by calisthenic exercise. John H. Clifton and one of the scholars furnish organ music. A look of intelligence beginning at the eye and o’erspreading the countenances of the scholars makes manifest their ability to successfully cope with Caucasian brains. This rising generation is destined to have a better showing than their predecessors as they will be better equipped for life’s work; stepping as they will into niches carved out for them by their parents or making way for themselves with greater success. Our thanks are due Miss Le Count and her corps of assistants who always appreciate the presence of visitors.”

Let Me Know What You Think

As I plan for a second year of Found in Philadelphia, I would greatly appreciate hearing your comments and thoughts for the future of the podcast.

You can leave a comment here in the blog, or on your podcast app.

You can also help by taking this short survey about the podcast at https://www.surveymonkey.com/r/Y23Q8S5

Many thanks for your help!

Pinguel, Fred. Our Statement on the Current Moment and Our Call for #PoliceFreeSchools and to #DefundThePolice. Philly Student Union website. June 6, 2020. Online at https://www.phillystudentunion.com/post/our-call-police-free-schools-black-lives-matter

U.S. Department of Education. The State of Racial Diversity in the Education Workforce. July 2016. Available online at https://www2.ed.gov/rschstat/eval/highered/racial-diversity/state-racial-diversity-workforce.pdf

Wright, R.R. and Ernest Smith. The Philadelphia colored directory; a handbook of the religious, social, political, professional, business and other activities of the Negroes of Philadelphia. Philadelphia: Philadelphia Colored Directory Co., 1908. Available online at https://hdl.handle.net/2027/inu.32000009296965