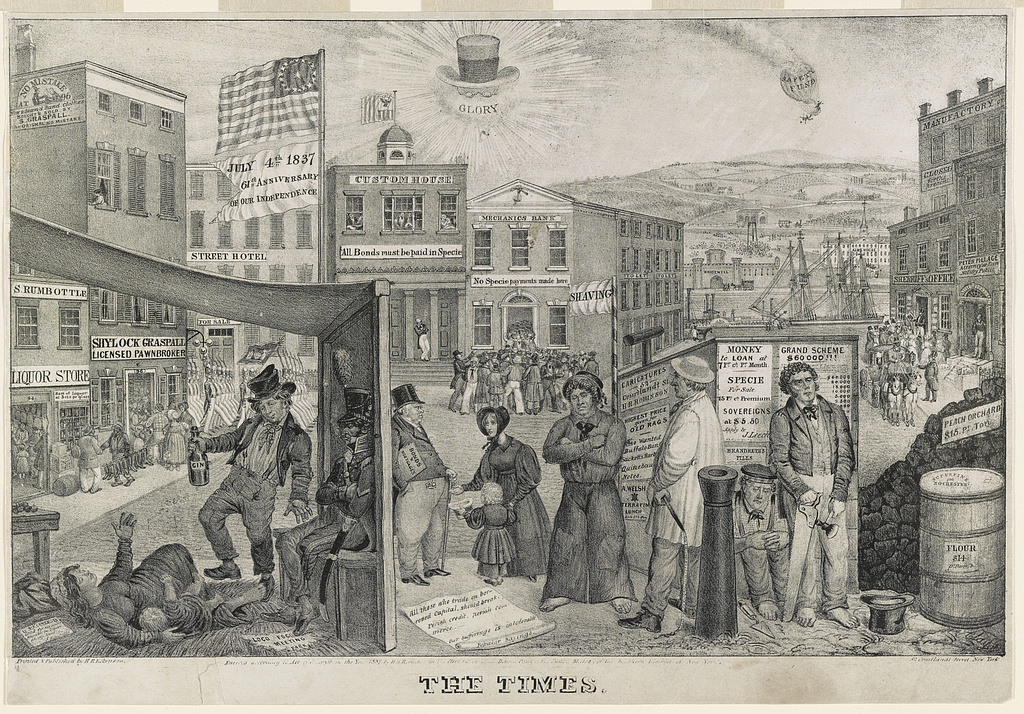 Episode No. 14 – Violence in the Streets (Companion Blog)

I had such a hard time on this episode! The city of Philadelphia that we know today came out of a crucible moment in the 1840s and 1850s. Larger economic forces brought on the Panic of 1837, but its effects were felt deeply by residents of Philadelphia. Historians blame the Panic of 1837 on the deregulation of banks, which issued an oversupply of banknotes in the U.S., that created a bubble in real estate, transportation charters, global trade, and slavery-grown cotton, and would wreak havoc on the enslaved in the South, who were bought and sold to help banks cover their debts. It’s hard to vent your frustrations on this blameworthy broth of politicians, bankers, merchants, and investors. Instead, Philly’s frustrated working class turned on the outcasts in their midst, their Irish Catholic and Black neighbors.

Philadelphia and its outlying districts in 1853, just before consolidation (J.L. Hazzard map, The Library Company of Philadelphia)

A political cartoon from 1842 following years of anti-Black violence in Philadelphia. William Penn looks down on scenes of riot and devastation. A group of firemen can be seen to the left, a Black fife and drum band are beaten on the right. At the center, the cartoon inaccurately shows women and children fighting, with a racist caricature of a Black woman raising her fist against a kneeling white woman. The violence of this period was carried out predominantly by young white men. (Historical Society of Pennsylvania)

During the anti-Catholic violence of 1844, the First Bank on Third Street served as headquarters for the various militia troops who were called in to restore order. This early photo was taken during the 1844 riots. (The Library Company of Philadelphia)

Hand-in-Hand Fire Company located on Ninth Street, above Poplar, in the Spring Garden district. Note the railroad tracks of the Philadelphia Germantown and Norristown Railroad in front. This photo dates to 1865. (The Library Company of Philadelphia)

It’s not a pretty story. And while working on this episode, there were so many echoes of issues that are still blaring today. The global forces that destabilized regions and caused an uptick in immigration, followed by Americans renewed anger against immigrants (see the buses of immigrants still arriving from Texas). The lack of resources, concentration of poverty, and overwhelmed law enforcement, which led to a steady flow of violence in the streets, that would regularly break out into deadly riots (follow WHYY’s new Stop and Frisk podcast about Philly’s current gun violence crisis). State laws that deputize individuals to deprive others of their rights across state lines (see discussion of recent anti-abortion legislation compared to the Fugitive Slave Act).

What didn’t make it into the episode:

Irish nationalism and abolition in Philadelphia

There is an interesting wrinkle to this story of violence during the 1840s in Philadelphia that didn’t make it into the episode. The year 1843 began with an optimistic feeling that this would be the year that Ireland would no longer be part of Great Britain. The Irish nationalist leader, Daniel O’Connell, was gathering momentum to push for the Repeal of the Act of Union. The year of 1843 was to be the “Repeal Year.” O’Connell was up against the antagonistic prime minister, Sir Robert Peel, founder of the London Metropolitan Police.

The Irish in America were enthusiastically behind O’Connell. They had been raising money for his efforts for years through their local Repeal Associations. With its large Irish community, the Philadelphia Repeal Association had a very active membership. On July 4, 1841, the Philly Repealers had organized a grand parade, marching through the streets of the city, and rallying around the orator Father Patrick Moriarty of St. Augustine’s church.

But things were complicated for the Irish Repeal movement in the United States because Daniel O’Connell continually and loudly condemned slavery. O’Connell had been a member of parliament and actively pushed for the emancipation of the enslaved in the British West Indies, which became law on August 1, 1838. O’Connell had also personally met many of the leading Philadelphia abolitionists, including Robert Purvis, and he emphasized peaceful protest. So, O’Connell was livid when he heard about the anti-Black mob that raged through Philadelphia in 1842, after a group of young Black men marched through the streets to celebrate the West Indies emancipation. When he heard that many in the mob were Irish, he publicly denounced them:

“When the people of colour met to celebrate the glorious 1st of August, 1838… [they] were assailed by truculent and ruffian violence and he blushed to say that Irishmen took a prominent part… Where were the Catholic priests? Why did they not raise their voice against this iniquitous proceeding?”

This nasty political cartoon from 1843 shows hypocrisy all around. Daniel O’Connell is depicted as a stereotypical Irish thug wielding a club and carrying a money bag labeled “Repale Rint.” To the right is abolitionist Lloyd Garrison, who refuses to support Repeal out of fear of losing English supporters. President Tyler, a slave owner and Repeal supportor, rises from the chair on the left. Tyler’s son, Robert, is next to him. Robert Tyler was soon to be head of the Philadelphia Repeal Association. To the left is a racist depiction of a Black servant, stating his preference for Whig Henry Clay, who had recently lost his bid to become president (again), quit the Senate, and publicly broken political ties with Tyler. (The Library Company of Philadelphia)

O’Connell’s public chastisement of Philly’s Irish and their leaders, plus his rededication to abolitionism, eventually caused a split in the Philadelphia Repeal Association. In May 1843, O’Connell drew a hard line, telling any Irishmen who supported slavery that “we will recognize you as Irishmen no longer.” This speech caused an anti-slavery minority of Philly Repealers to form a rival repeal group. The original Philadelphia Repeal Association refused to condemn slavery outright, and it was this group that enjoyed the support of Father Patrick Moriarty. In fact, Moriarty would be traveling through the South raising money for Repeal when the mob destroyed and then burned his church, St. Augustine’s, in May 1844. (See J.F. Quinn, “The Rise and Fall of Repeal,” 2006 in the sources cited below.)

Ireland wouldn’t separate from the United Kingdom until 1923.

An 1844 print showing the July 1844 riots in Southwark when militia troops fired on the mob outside St. Philip Neri church (shown in the background on the right). (Free Library of Philadelphia, Prints & Pictures)

Ruins of Kensington after the violence of May 1844. This contemporary view is looking northwest at the corner of Masters and N. American Streets (towards where the Crane building stands now). In the foreground is the burned market shed building that ran down the center of N. American (what was then called Washington Street). Beyond are the buildings destroyed by fire. (Historical Society of Pennsylvania)

Childs, Ward J. “The Tangible Manifestation of Law (Part I)”. Newsletter of the Philadelphia City Archives. No 31 (June 1977). https://www.phila.gov/phils/Docs/otherinfo/newslet/law1.htm

Heath, Andrew. In Union There Is Strength: Philadelphia in the Age of Urban Consolidation. University of Pennsylvania Press, 2019. JSTOR, www.jstor.org/stable/j.ctv16t6hgz

Schrag, Zachary M. The Fires of Philadelphia: Citizen Soldiers, Nativists, and the 1844 Riots over the Soul of a Nation. New York: Pegasus Books, 2021.