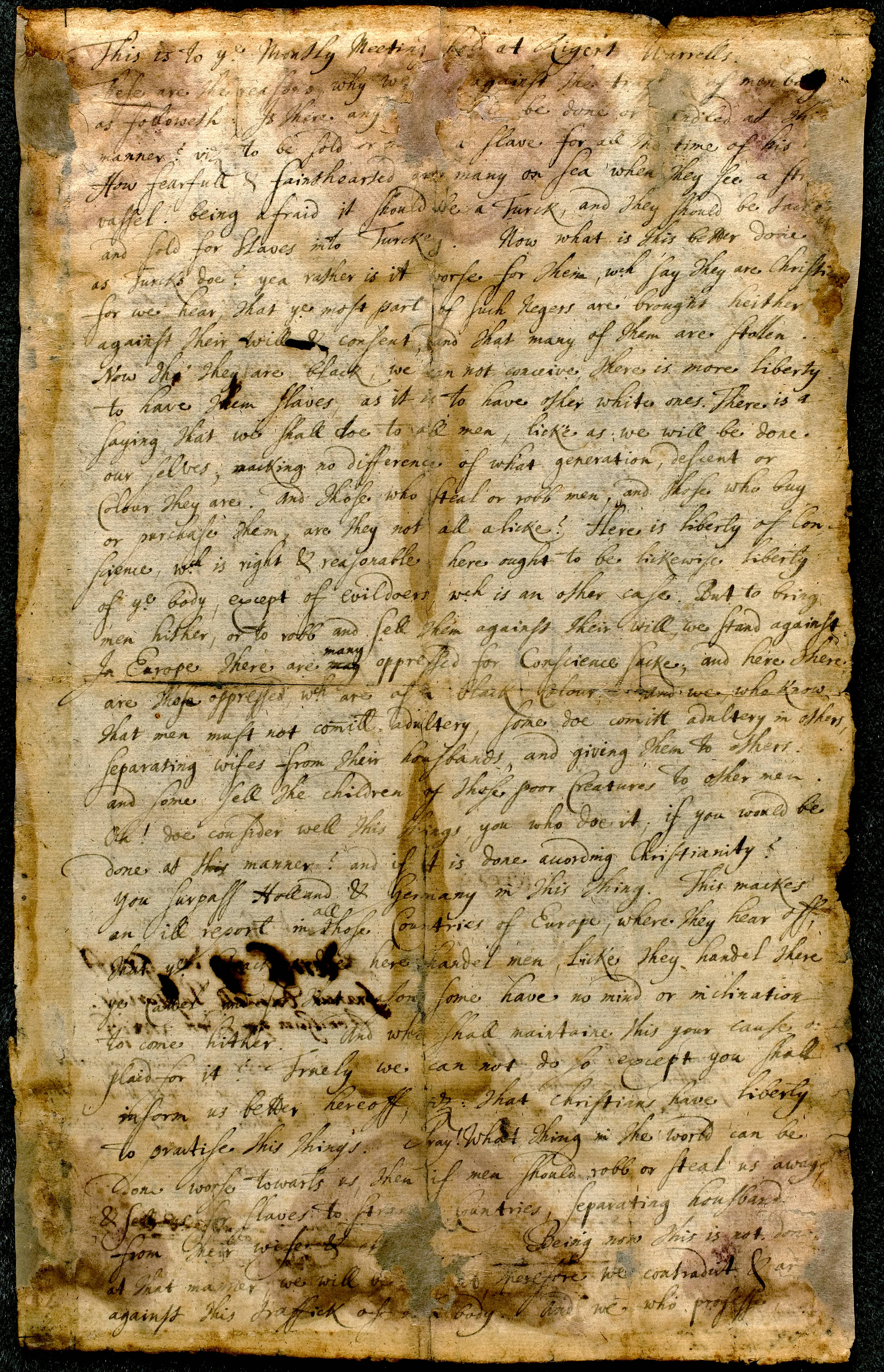 I became interested in the story of the Germantown Protest of 1688 after hearing about it on another podcast, the “Seeing White” series by the Scene on Radio podcast. I highly recommend the entire series, but “Episode 33: Made in America” was where I first heard about the Germantown Protest. I was surprised that I had never heard of it before, being a Philadelphia history nerd. So, of course, I rushed to the internet and quickly found all of the fascinating threads of this story. How the writers were there at the very beginning of Penn’s colony. How they founded Germantown after facing religious intolerance in Europe for generations. How their search for the true way, the right way, to live led them to join one religious splinter group and then another. How angry they were when the Quaker’s colony of Pennsylvania fell short of their dreams by allowing African slavery to thrive here. And how the Protest itself somehow survived and was now in the archives of Haverford College.

The “Seeing White” series also connected me to Ibram Kendi’s book Stamped from the Beginning: The Definitive History of Racism in America. While Kendi does not delve into the backstory of the Protest, he does put it into context within the history of anti-racist ideas in America. I would also highly recommend Stamped from the Beginning for providing the reader with a pair of magical glasses that allow you to see his three proposed historical trends throughout American history: anti-racism, assimilationist theories, and straight up racism. You’ll start seeing these trends everywhere, maybe even in your own personal beliefs. Kendi contends that anti-racist activists have had to fight against not only racism, but also assimilationist ideas, which might be well-meaning but still perpetuate racist thinking.

My pursuit of the Germantown Protest story took me across war-torn northern Europe in the 1600s, where I discovered the violent histories of the Mennonites and Amish, and all of the other splinter groups they formed. It made me completely revise my preconceived notions about these religious groups, who are still a large part of central Pennsylvania culture. You need to take a look at the Martyr’s Mirror, a seminal publication for both Mennonites and Amish, which was first published in 1660, to understand how religious persecution, defiance, and radicalism helped define these groups. While we might think of them as somewhat old-fashioned today, they were well-organized, white-hot radicals of their day, and were just starting to be tolerated by the end of the seventeenth century.

As I pursued the different threads of the Germantown Protest story, I kept running into the work of historian Katherine Gerbner. She was everywhere I went, answering the questions that I had, following in the footsteps of the writers of the Protest, and giving this story a fresh perspective. This episode owes a great deal to her research. And if you were shocked to learn that Pennsylvania’s Quaker founders were slave owners who profited from the slave trade, Gerbner has been working on that history too. Her recent book, Christian Slavery, tackles the complicity of Protestantism with slavery across the Atlantic world. This episode only scratches the surface of that story.

Sachse, Julius Friedrich. Letters Relating to the Settlement of Germantown in Pennsylvania, 1683-4, From the Könneken Manuscript in the Ministerial Archive of Lübeck. J.F. Sachse: Philadelphia, 1903.