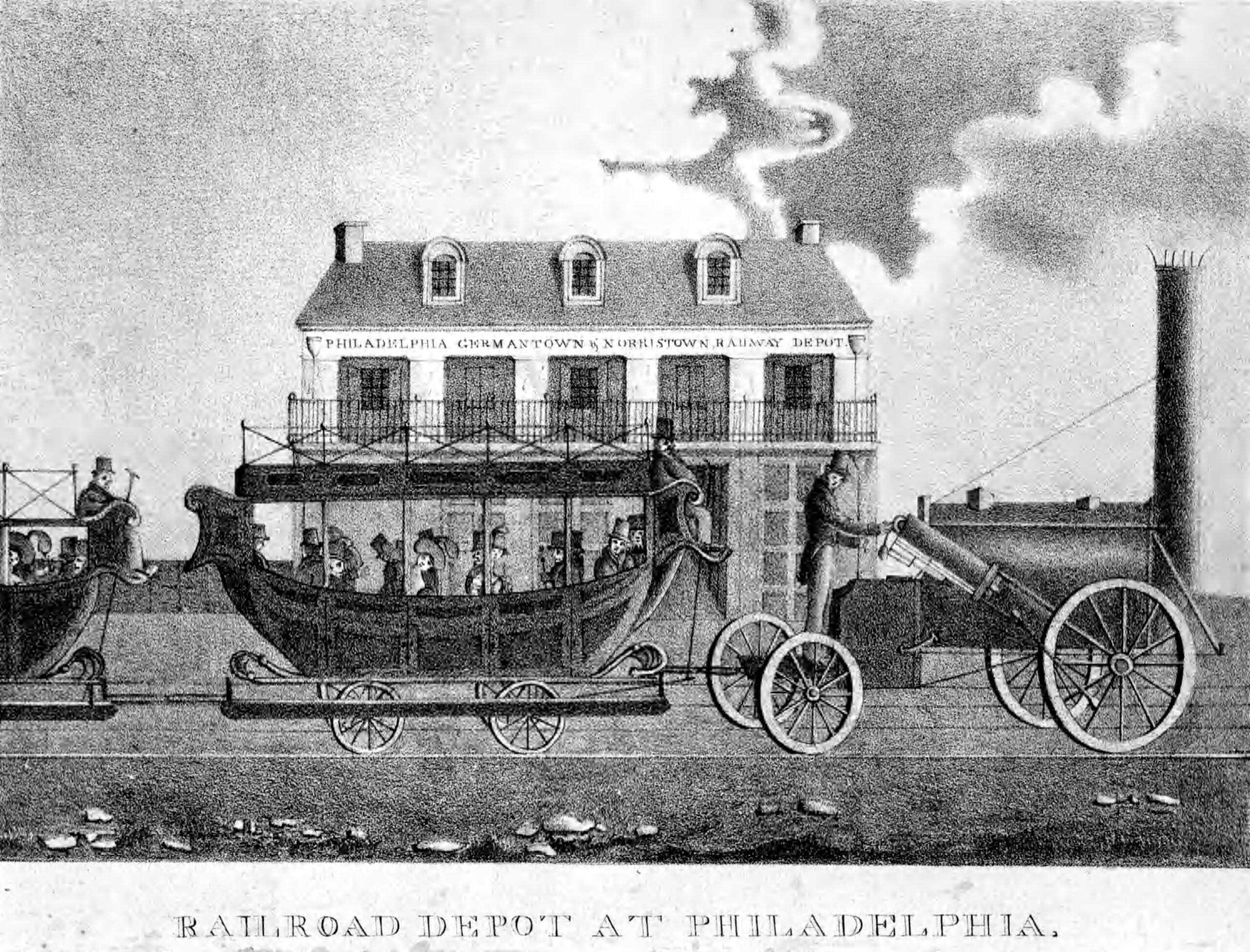 Whenever I go to historic house museums, I always want to see where the servants lived and worked. Most of the time, these areas have been repurposed for storage or office space, maybe a kitchenette for tour guides. They’re rarely open to the public. But I figure that if I lived back then, I’d be the one carrying coal up and down the back stairs, not having tea in the parlor.

That is part of the reason I wanted to do this series on Philly’s streets. I wanted to know what was happening to everyday people – people like me – in the past. The story of Philly’s streets, the streets we still travel along today, seemed like a good way to talk about everyday experiences in a new way. Sometimes the stories are remarkably approachable, dealing with issues we can relate to today. But sometimes the history is so different from our own experience, that we’re forced to look at things in a new way.

So this episode is organized around technology and how it changed (and did not change) people’s lives.

I was forced to drop my misconceptions that steam power was needed to create large factories, which then exploited unskilled workers. For early textile mills, it turns out that water power, machines, capital funds, and an abundant, unskilled work force, were really the key ingredients needed.

But work was changing for a lot of people in Philadelphia in the 1830s and 40s. The textile mills of Manayunk were just one extreme. Bruce Laurie’s Working People of Philadelphia 1800-1850 outlines how people in this period were working in a mix of factories, smaller scale manufactories, sweatshops, and in artisan-led workshops, as well as doing piecework, or outwork, at home. It’s hard to boil this down into a single story, but generally, more and more people were working outside of the home on other people’s schedule, usually for long hours, at low wages.

And the story of work in Philadelphia in the 1830s and 40s is even further complicated by the fact that a large proportion of the population was barred from working in industry, or any other skilled trade. The Black population, approximately 10% of the city, was kept at the margins of the workforce. Their options were extremely limited. They took on the jobs that no one else wanted, with many working long hours, for low wages, in domestic service. And both men and women needed to work to make ends meet.

But Black workers were not invited to join the growing labor union movement, though Black caulkers at the Philadelphia Navy Yard did join the citywide general strike of 1835. Even the most radical workers’ rights advocates excluded the Black population from organizing. Despite living in a country where nearly 4 million enslaved Black people had their freedom and labor stolen from them every day.

The large buildings at the edge of the Schuylkill River are early textile factories. They were built along the canal where they would be close to water for power and transportation. The Philadelphia and Norristown Railroad was already built at the time that this print was published. (Library Company of Philadelphia)

Philadelphia and Norristown Railroad bridge over the Wissahickon at Manayunk c. 1834

The building immediately to the right of the image is an early textile factory. (Library Company of Philadelphia)

Smaller scale manufactories like this one were adopting steam power in Philadelphia in the 1840s. (Library Company of Philadelphia)

Tangled Up in Trains

The story of trains in the city is complicated. We still live with trains every day. I can hear the train whistle early in the mornings. They’re easy to take for granted.

People also love trains. Who isn’t impressed by the Baldwin 60,000 locomotive at the Franklin Institute? Trains are fascinating, and so steam punk.

But the way trains took over the streets in the 1830s and 40s was disruptive and messy. The fastest way to connect Philadelphia’s Delaware docks to the regional rail network was to run rails right along existing streets. This meant that Philadelphians had to contend with iron rails, and rail car traffic, along Market Street, Broad Street, Callowhill Street, North Ninth Street, and Washington Street. People would have had to navigate the rails on foot, and horse-drawn vehicles would have had to cross over them.

I’ve tried to find images to help us remember what the streets of Philadelphia looked like when the railroad ran straight onto city streets.

At the corner of Front and Willow Street, this advertisement shows the Philadelphia and Columbia Railroad. A horse drawn rail cart is loading or unloading at the side of the store. In the distance, a railcar trundles off around a corner. (The Library Company of Philadelphia)

Note the railroad lines that curve from the right down to the left along Dock Street. These were part of the rail lines that ran down Market Street, turned south down Third Street, and then snaked along Dock Street to the docks on the Delaware. (The Library Company of Philadelphia)

The drawings clearly show rail lines running along the docks on the Delaware (above), and in front of their warehouse (below). (Library Company of Philadelphia)

Though this photo is from much later during the Civil War period, the rail lines and box cars are visible along Market Street. (Library of Congress)

The green squares would soon be replaced by City Hall. Note the freight cars standing in the center of Broad Street. These might have been waiting to unload at the Pennsylvania Railroad freight yard just to the right of this photo. (Library Company of Philadelphia)

Anon. “The Beginnings of American Railroads and Mapping.” Library of Congress, accessed 10/7/2022. https://www.loc.gov/collections/railroad-maps-1828-to-1900/articles-and-essays/history-of-railroads-and-maps/the-beginnings-of-american-railroads-and-mapping/

Royall, Anne Newport, and Joseph Meredith Toner Collection. Sketches of history, life, and manners in the United States. New Haven: Printed for the Author, 1826. Pdf. Retrieved from the Library of Congress, www.loc.gov/item/02000382/: